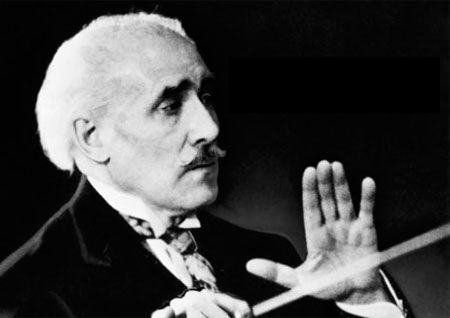 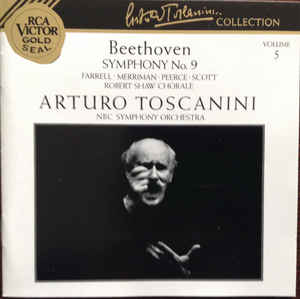 “Arturo Toscanini (1867-1957) spent much of his conducting career trying to give a “definitive” performance of Beethoven’s ninth symphony. He conducted the symphony numerous times; it wasn’t until 1952 that he was sufficiently satisfied with a recording of this major work to authorize a commercial release.

Toscanini had hated to record during the days of 78-rpm discs. Each 12-inch record side played a little under five minutes, so it was necessary for the conductor and musicians to stop periodically while the master was changed. Only in the United Kingdom, where Toscanini made recordings with the BBC Symphony Orchestra, did a record producer (Fred Gaisberg) come up with a system using two recording machines, so that Toscanini and the musicians did not have to stop.

Toscanini was very happy when RCA Victor began using magnetic sound film to record his sessions with the NBC Symphony. Then, in 1948, RCA switched to magnetic tape. With both processes, continuous performance were possible and true high fidelity was realized. Toscanini told his friends that he was often very happy with the long-playing records that RCA began issuing in 1950. By 1952, RCA was using a single full range microphone, suspended above Toscanini’s head, to achieve its “New Orthophonic” process. Occasionally, an additional microphone was used to pick up soloists. The results in this recording were exceptional and very realistic.

Toscanini always felt there were problems with performances with Beethoven’s ninth symphony. Something always seem to go wrong, either with the soloists, the chorus, the orchestra, or the conductor himself. It’s likely other conductors and musicians recognized the challenges of this very difficult music. Just as Beethoven had done with his “Missa Solemnis,” the composer challenged the musicians with his very profound and very intricate music. Both works stretch the singers to their vocal limits; having sung “Missa Solemnis” and the ninth symphony, this writer can attest to the considerable challenges of the music.

The commercial recording that Toscanini made with the NBC Symphony Orchestra in Carnegie Hall in 1952 was the culmination of years of trying to understand Beethoven’s intensely complicated musical score. That Toscanini succeeded in producing a legendary recording is a real tribute to his greatness. It’s particularly amazing that he made this recording the year he turned 85 years of age.

Joining Toscanini and the NBC Symphony in this recording were a group of outstanding vocal soloists, particularly American tenor Jan Peerce, whom Toscanini considered among his all-time favorite singers. Peerce first sang with Toscanini in a 1939 broadcast performance of this symphony. The Robert Shaw Chorale, which had first performed with Toscanini in a 1945 broadcast performance of the ninth, were on hand, again providing some of the best choral singing possible. Shaw would go on to become a symphony conductor himself (with the Atlanta Symphony) and some said that he was much influenced by his mentor.

It is well known that the four movements attempt to present various musical philosophies of life. Beethoven basically rejects the first three proposals, even reviewing them in the opening moments of the fourth symphony, and then has the bass soloist sing, “O friends, not these sounds.” Beethoven uses Schiller’s “Ode to Joy” and the recurring main theme has become one of his most famous melodies, later used as the tune for the hymn “Joyful, Joyful, We Adore Thee.” The composer clearly had already recognized that one must accept fate and not be discouraged; it was such determination that enabled to live and continue composing despite increasing deafness.

This performance set the standard for all recordings of the Beethoven ninth symphony. Few conductors, singers, and musicians have succeeded as well as Toscanini did in this memorable performance. “