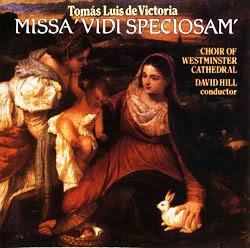 Almost all Victoria’s surviving works were printed in his lifetime; many of his motets were reprinted as many as six times. Of the few works that survive only in manuscript some were wrongly attributed to him by Pedrell at the beginning of the twentieth century. The four-part Ave Maria, perhaps rightly, continues to be accepted as Victoria’s, though it has to be noted that Pedrell first printed it in 1913 and its source remains obscure.

Victoria set the Hymn Ave maris stella twice and published one version in 1581 and this second one in 1600. Alternate verses are sung to plainsong (in one of the many variants of this memorable tune) and the polyphony paraphrases and elaborates it. Ave maris stella is the Hymn at First Vespers on Feasts of the Blessed Virgin.

Ne timeas, Maria, published in 1572 and reprinted several times in subsequent years, is an antiphon at Second Vespers of the Annunciation to the Blessed Virgin Mary.

Sancta Maria, succurre miseris, published in 1572 and reprinted several times in subsequent years, is a prayer for mercy and help for the people, the clergy and for women. It is the Magnificat antiphon at First Vespers for Marian Feasts.

In 1592 Victoria published his Missae … liber secundus and in it is a Mass based on Vidi speciosam. Like its model this Mass is for six-part choir (SSATTB); it is particularly concise, at times declamatory and homophonic—especially in the Gloria and Credo. Victoria begins his Kyrie with the first phrase of the music of the motet with hardly any variation except that he reverses the appearance of the vocal groups, TTB being followed by the SSA group. The Christe for SSAT only is a reworking of the motet’s music at ‘circumdabant eam’. The second Kyrie is based on the motet section ‘Et sicut dies verni’.

The Gloria is a mixture of free homophonic writing mixed with derivations from the first half of the motet until at ‘Qui tollis peccata mundi’ Victoria uses the motet’s second half opening ‘Quae est ista’. Near the Gloria’s end triple time is introduced for ‘Quoniam tu solus Sanctus. Tu solus Dominus’, balancing the similar triple time at ‘Domine Deus, Agnus Dei’ just before the ending of the first half. The Gloria ends with ‘in gloria Dei Patris. Amen’ to music based on the phrase ‘et lilia convallium’ in the motet.
The Credo is concisely written, traditionally so because of its wordiness. Like the Gloria it mixes short syllabic phrases with quotations and rewriting of motifs and sections of the motet model. At ‘Crucifixus’ there is a long passage for the high voices (SSAT) only. The rare repetition ‘Et iterum, et iterum’ is set to the motet’s music for ‘et lilia, et lilia’. Like the end of the Gloria, the Credo’s ‘Amen’ makes use of the flowing phrases of ‘convallium’.

The Sanctus begins with the Vidi speciosam opening music (SSA followed by TTB) and, as so often with Victoria, he breaks into triple time for ‘gloria tua. Hosanna in excelsis’. The Benedictus (SATT) has its own ‘Hosanna in excelsis’ for six voices to a rewriting of ‘Et sicut dies verni’.

Finally, there is just one setting of the Agnus Dei (ending with ‘dona nobis pacem’ by Victoria, for seven-part choir (SSAATTB). The second alto follows the first soprano in a canon ad diapente, at the fifth below. The Agnus Dei makes only minimal use of the motet model. Despite the independence of the voices in this richly polyphonic ending, the treatment is very syllabic; one could hardly call the few flourishes melismata.