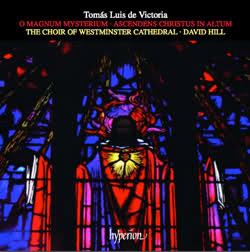 Tomás Luiz de Victoria was born in 1548 in Avila, birthplace of St Teresa. Just as she seems to personify the religious ethos of sixteenth-century Spain (the good side of it, at least), so Victoria came to embody the best of the Spanish character in music. As a youth he learnt his art as a chorister at the Cathedral of Avila. So promising was he that he was sent to Rome at seventeen years of age, patronized by Philip II and by the Church, to study at the Jesuit’s Collegium Germanicum.

Victoria’s musical career in Rome brought him into contact with Palestrina and the innumerable singers, organists and composers from all over Europe who were active in the chapels and churches of that great city at the very time when Catholicism regained confidence, new vitality and disciplined reform. The young Spanish priest was soon publishing his compositions in sumptuous editions (even Palestrina was jealous).

The success of his Roman years did not prevent Victoria from yearning for a quiet life in Spain. After his publications of 1585 (including the famous set of Holy Week music) he achieved his desire and returned to take up the position of Chaplain and Chapelmaster at the Royal Convent of the Barefoot Nuns of St Clare in Madrid, effectively the home and chapel of Philip II’s sister, the Dowager Empress Maria. There he ended his days producing less and less after 1600 and nothing, so far as we know, after the publication in 1605 of the great Office of the Dead, the Requiem for the Empress who died in 1603. Victoria died in 1611. He had turned down offers from Seville and Saragossa; he had visited Rome during the period 1592–94, supervising the printing of his works and attending Palestrina’s funeral. In 1595 he returned to Madrid and stayed. 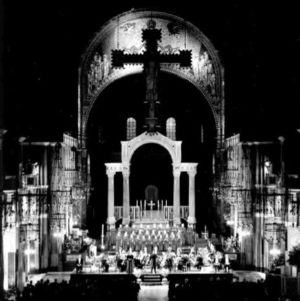 since the revival of Victoria’s music eighty years ago. Although the original publication entitles it In Circuncisione Domini, its text is taken from a responsory of Christmas Matins and its use has always been as a Christmas motet. One of Victoria’s most endearing creations, it unfolds serenely, richly warm when it expresses the wonder that even the animals behold the Infant in the manger. Then a wonderful hush as Victoria musically caresses ‘O beata Virgo’. The final ‘Alleluia’ dances in triple time and then, with a welter of running notes, comes grandly to a close. The work is set for four-part choir (SATB). This fine work became the basis for a Mass (also for four-part choir) published by Victoria twenty years later, in 1592. It uses all the motives of the motet except for the wonderful brief moment of the ‘O beata Virgo’ section. Victoria, it seems, omitted this from the material for the Mass because it was suitable only for quotation, not development. Similarly he omitted the opening phrase of ‘O quam gloriosum’ in his famous Mass on that motet.

In the Missa O magnum mysterium Victoria swings into triple time briefly just once in the Gloria, fleetingly three times in the Credo, and then to great effect in the Hosanna which follows both Sanctus and Benedictus. He varies his four-part vocal texture just twice. The Benedictus is for three voices (the bass is silent), and in the single setting of Agnus Dei he divides the trebles and makes them sing in canon at the unison. This five-part ending is customarily repeated to accommodate the words ‘dona nobis pacem’.

The motet Ascendens Christus is specified by Victoria In Ascensione Domini and the text comes from the last Responsorium of the Second Nocturn of Matins for that Feast. It was published five times in Victoria’s lifetime. Like O magnum mysterium, it first came out in 1572, and once again Victoria chose to make a Mass upon it which was published in 1592.

In perfect accord with the meaning of the words, Ascendens Christus is joyous and brilliant with strong rising phrases and ringing Alleluia motives. Again in accord with the origin of the text in a Responsorium, the musical plan is ABCB. The work is in two distinct halves. It is for five voice parts (SSATB).

All the motet’s material is imaginatively absorbed into the composition of the Mass. The five voices are retained but sections for reduced choir (or soloists) are scored for four voices in varied combinations. The ‘Christe eleison’ is SSAT. The ‘Domine Deus’ in the Gloria is for SSAB. The Credo has the ‘Crucifixus’ and ‘Et resurrexit’ for SSAT. The Benedictus is for SATB. The Agnus Dei is set only once and is for six voices, SSATTB, in which the first tenors, altos and second trebles are in canon (trinitas in unitate). In this recording the Agnus Dei is sung twice, once to ‘miserere nobis’ and repeated to ‘dona nobis pacem’.

All is lightness and brightness; the Gloria seems to bounce along, so springy are the rhythms, so concise and clearly declamatory with the verbal accents incomparably set. The triple-time Hosanna, sung to the same music after Sanctus and Benedictus, is typical of Victoria’s mature Masses. All is brief, clear and lightly decorated, perfect in liturgical propriety.

Victoria regarded the Mass as something happy and often jubilant. There are moments of quiet adoration or contemplation, but it is very significant that Victoria never chose to base a Mass upon sad or penitential motets, but always upon those of a joyful nature. 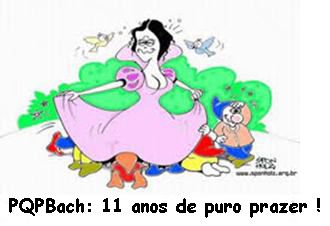