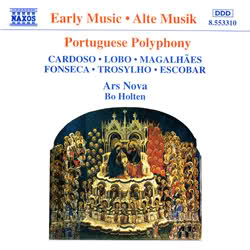 Portugal was historically by no means isolated from the mainstream of European culture, although the earlier periods of Portuguese polyphony may be relatively little known. There were, nevertheless, monastic and ecclesiastical connections with other parts of Europe, and, of course, with Rome, while the proximity of Spain, most evident in the golden age of Portuguese polyphony, ensured that Portugal was part of the wider European tradition of polyphony, with an important fifteenth century centre in the Royal Chapel, reflected also in the music of cathedrals and choir-schools, notably, in the sixteenth century, at Évora.

Among the earlier of Portuguese composers to win a wider reputation, particularly in Spain, was Pedro de Escobar (c.1465-1535), convincingly identified by Robert Stevenson with Pedro do Porto or Pedro del Puerto, employed at the Spanish Royal Chapel of Queen Isabella I and later in Seville. His motet Clamabat autem mulier (But there cried out a woman) won considerable popularity, to be used by Gil Vicente in his play Auto da Cananea in 1534, arranged for solo vihuela by the Spanish composer Mudarra, and transported to the New World, notably to Guatemala, where two unattributed manuscripts of the work are found.

Bartolomeo Trosylho (c.1500 – c.1567), his name variously spelt as Trosilho or Truxillo, was a singer in the Royal Chapel of Dom João III, becoming master of the chapel in 1548. Although the heading of the manuscript containing Circumdederunt me (My enemies have surrounded me) is pro defunctis trosylho (for the dead, Trosylho), the text is in fact the Introit for Septuagesima Sunday. Trosylho’s richly polyphonic setting is for four voices.

Manuel da Fonseca (fl.1540) is recorded as having been mestre da capela at the Cathedral of Braga in 1544. Betweeen 1542 and 1543 he seems to have been mestre da capela to the king’s son Dom Duarte and is chiefly known for his Liber Introitus, a copy of which, dated 1615, still survives in Braga. Beata viscera Mariae (Blessed be the womb of Mary) is not now an Introit in the Roman rite, though the first lines are used as the Communion verse for Mass on Feasts of the Blessed Virgin. It might be supposed that it was originally an Introit for a votive mass to Our Lady, perhaps in the Braga rite, which has now been discontinued following various liturgical reforms. It is based on the relevant plainchant in the bass, with the other three voices weaving a texture around its steady and even progress.

It was not until the beginning of the seventeenth century that the work of Portuguese polyphonic composers began to be known more widely. The most famous three, Duarte Lobo (c.1565-1646), Manuel Cardoso (1566-1650), and Filipe de Magalhães (c.1571-1652) were all pupils of Manuel Mendes (c.1547-1605) at Évora, an important cathedral and university city in eastern Portugal. All three also became very successful musicians after moving to the capital, Lisbon.

The youngest of the group, Filipe de Magalhães, was reputedly the favourite pupil of Mendes, whom he succeeded at Évora. He later moved to Lisbon, where he was choirmaster at the Misericórdia and master of music in the Royal Chapel. He is regarded as being a highly accomplished composer, capable of an unparalleled smoothness of polyphonic style and elegance of vocal line. This can be heard in his four-part Vidi aquam (l beheld the water), a piece to be sung during the procession and sprinkling of holy water at the beginning of Mass in Paschal time, and in his six-part Commissa mea pavesco (I tremble at my sins), a verse from the third responsory at Matins in the Office for the Dead.

The Mass O Soberana luz (O sovereign light), its title a possible reference to King Philip IV of Spain, was included in the Liber Missarum of Magalhães, published by Craesbeck in 1636. This publication begins with the setting of Vidi aquam and ends with Commissa mea pavesco. Although the first four notes of the tenor part in several movements of the Mass are identical with the plainsong Mass Cum jubilo, for feasts of the Blessed Virgin, the rest of the line is different. It is more probable that this is a parody Mass, derived from another composition, since the opening tenor theme is always presented with two descending lines in upper parts, often in thirds. These materials are variously treated, sometimes with contrasting material, but they can be clearly heard in the openings of the Kyrie, Gloria, Credo, Sanctus, Benedictus, and Agnus Dei. Another feature of this Mass is the continued use of contrast between sections which use longer notes and those where the rhythms are much faster and livelier. This would point to a source, perhaps a lost villancico, where there might have been this kind of contrast, possibly between the copla (stanza) and the estribillo (refrain).

Duarte Lobo became mestre da capela at the Cathedral in Lisbon. Testimony to the wider popularity of his music may be seen in the publication of his music by Plantin in Antwerp, his Christmas Responsories in the Opuscula of 1602, followed by a book of sixteen Magnificats in 1605 and books of Masses in 1621 and 1639. Both Audivi vocem de caelo, (l heard a voice from Heaven), a six-voice setting of a verse and response for Lauds from the Office for the Dead, and Pater Peccavi (Father I have sinned) were included in the 1621 volume. Lobo remained the only one of the Évora composers to have his music printed by Plantin.

Frei Manuel Cardoso was born in Fronteira in 1566 and professed as a Carmelite friar in Lisbon in 1589. In 1605 he too completed a book of Magnificats and began a long period of correspondence with Plantin with a view to having this published in Antwerp. The fee demanded by Plantin, however, was too high and instead he gave the work to Peter Craesbeck, a former apprentice of Plantin, a printer now established in Lisbon. The book was eventually printed and published in 1613. Cardoso had connections with the Portuguese and Spanish royal families, with the future King Dom João IV possibly his pupil and later certainly his patron. One of the features of Cardoso’s style is his consistent use of augmented chords, particularly in four-part writing. Most scholars see this as an absorption of Baroque harmonic practice into sixteenth century style. Two eariy instances can be heard in the six-part Magnificat Secundi Toni at the words (salu)ta(ri meo). Although the final Sicut erat (As it was in the beginning) has no instances of a full augmented chord, every other movement has at least one, and there are no fewer than nine in the four-part Esurientes (He has filled the hungry).

in 1648, Craesbeck printed Cardoso’s Livro de Varios Motetes, consisting mainly of pieces for the Holy Week liturgy. The Lamentatio on the present recording is the second Lesson for Matins (1st Nocturn) on Maundy Thursday. Cardoso’s setting for six voices uses only the Vau and Zain verses, omitting those given as Heth and Teth. The work concludes with Jerusalem, Jerusalem, convertere ad Dominum Deum tuum (Jerusalem, Jerusalem, turn to thy Lord).

The vocal group Ars Nova is one of the most distinguished chamber choirs in Scandinavia in the field of early and new music. The twelve singers of the choir and the director Bo Holten have produced a series of internationally acclaimed compact discs and have given more than 650 concerts and broadcasts in Scandinavia, the rest of Europel Israel and Japan. The group was founded in 1979. Since 1990 Ars Nova has been the first professional choir in Denmark fully financed by private sponsors and foundations. These are Bikuben Bank and the Danish Ministry of Cultural Affairs and Foundation of Culture.

Ars Nova has been a pioneer in the performance of the work of Renaissance composers and in the field of modern music has concentrated its attention on compositions of the last 25 years, with work by distinguished Scandinavian composers as well as performing some 120 new works by composers such as Górecki, Pärt and Takemitsu. In 1991 the choir won the Danish Grammy Award for its recording of sacred music by Nicolas Gombert and in 1992 a Diapason d’or gold medal in France for the best classical compact disc, a recording of motets and chansons by Josquin des Prez.
(extraído do encarte)